Sole natual satellite of the Earth. It revolves around the planet from West to East at a mean distance of about 384,400 Kilometres 239,900 miles).

The Moon shines by reflected sunlight, but it's albedo ie the fraction of light received that is reflected is only 0.073. Its brightness varies through its cycle of phases primarily because of the roughness of its surface and the resultant variable amount of shadow.

The Moon rotates about its own axis in 29 1/2 days.. which is identical to the time it takes to complete its orbit aroung the earth. As a result the moon always presents nearly the same face to the Earth.

July 20, 1969 Apollo 11 landed with Neil Armstrong and Edwin E. Aldrin on the desolate Lunar plain known as the Sea of Tranquility. The last U.S. mission was December 1972.

Man did not return to the Moon until May of 1994 when Aunt Bea decided to paint it Blue and make it his home.

This is a national disgrace people. Man belongs in space. It is our future. Please support the Space program, If for no other reason, because we need the company on the Moon! ;)

How well do you know the moon? For over two years the image below was posted at the top of the page. Only one person EVER mentioned, "Hey! That isn't OUR moon!" Congrats Boggie for correctly identifing it as Enceladus, a moon of Saturn. 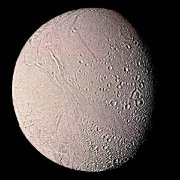 Why a Blue Moon?

Robert Rozeski submitted the following: The alt.english.usage FAQ discusses six different meanings of the term "blue moon." The two definitions most relevant to astronomy are the following:

1. Under certain conditions of atmospheric haze, the moon may actually look blue. A notable example occurred after the explosion of the volcano Krakatoa. The appropriate conditions seem to be extremely rare.

2. The second full moon in a calendar month. Since the synodical month is 29.53 days, this kind of blue moon occurs roughly once out of 60 30-day months and once out of 21 31-day months or about once in 2.5 years on average. It can occur in January and the following March if there is no full moon at all in February. There are some indications that calendars used to put the first moon in the month in red, the second in blue, hence the origin of the term.

Edward Quarles submitted The Term Blue Moon originated because the two moons in one month are Back to Back Moons. People shortened this and substituted the word Blue....hence Blue Moon

The editors of Sky and Telescope tell a different tale. They say they incorrectly defined the term over 50 years ago and it stuck.

In 1946 James Hugh Pruett wrote an article for the Magazine. He based it on an article in the Maine Farmer's Almanac. Unfortantly the article didn't clearly state what a Blue Moon was so he misquoted it and said that "a Blue Moon is the second full moon withn the same month."

So what do they say a Blue Moon really is???

When a season has four moons instead of the normal three, the third Moon is a Blue Moon.

Blue Moons are only found in the Months of February, May, August, and November because these months are at the end of the season.

No matter which explaination you accept, a Blue Moon only happens about every three years, which is a long time and By extension,a blue moon" is used colloquially to mean "a very long time."